Here are the facts:

So what does this really mean?

With longer life expectancies than men, women are forced to survive on less for longer than their male counterparts.

Read about six smart ways to avoid being a statistic in our recent article published across Fairfax publications. 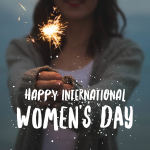