An Ageing Australia and Government Pressure 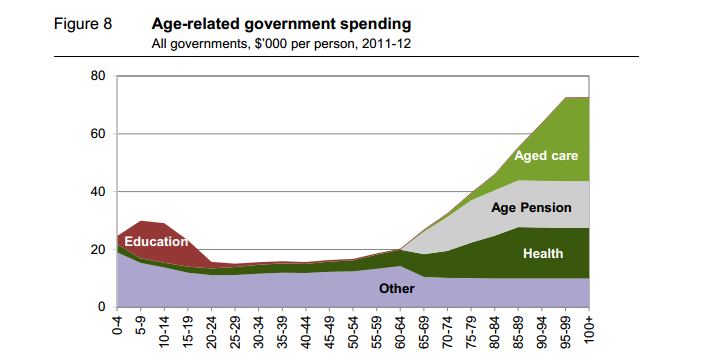 Australia’s population will both grow strongly and become older according to research released by the Government.  Such slow but profound shifts in the nature of a society do not elicit the same scrutiny as immediate policy issues. The preferable time to contemplate the implications is while these near-inevitable trends are still in their infancy.

Population ageing is largely a positive outcome, primarily reflecting improved life
expectancy. A female (male) born in 2012 will on average live for an estimated 94.4
(91.6) years.

Australia’s population is projected to rise to around 38 million by 2060, or around
15 million more than the population in 2012. Sydney and Melbourne can be expected
to grow by around 3 million each over this period.

Total private and public investment requirements over this 50 year period are
estimated to be more than 5 times the cumulative investment made over the last half
century, which reveals the importance of an efficient investment environment.

Labour participation rates are expected to fall from around 65 to 60 per cent from 2012
to 2060, and overall labour supply per capita to contract by 5 per cent.

Average labour productivity growth is projected to be around 1.5 per cent per annum
from 2012-13, well below the high productivity period from 1988-89 to 2003-04. Real
disposable income per capita is expected to grow at 1.1 per cent per annum compared
with the average 2.7 per cent annual growth over the last 20 years.

Collectively, it is projected that Australian governments will face additional pressures
on their budgets equivalent to around 6 per cent of national GDP by 2060, principally
reflecting the growth of expenditure on health, aged care and the Age Pension.

Major impending economic and social changes can create the impetus for new reform
approaches not currently on the policy horizon. For example:

• The design of the Age Pension and broader retirement income system might be
linked to life expectancy after completion of the current transition to 67 years in 2023.

• Using some of the annual growth in the housing equity of older Australians could
help ensure higher quality options for aged care services and lower fiscal costs.

• Wide-ranging health care reforms could improve productivity in the sector that is the
largest contributor to fiscal pressures. Even modest improvements in this area
would reduce fiscal pressures significantly.

Listen to Olivia talk on ABC Radio about the potential changes that we may see occur in years to come. Money Monday on ABC Radio An Ageing Australia